Elizabeth Carlisle, who can be seen grinning as she
holds two dead, soaking-wet rabbits by the scruff
of the neck—rabbits she just drowned.


"The Petland manager took the pic for me. She reminded me that there were people outside  as I was swearing at them to just hurry up and die," said Miss Carlisle.


The rabbits also suffered from deep wounds, an eye missing, a broken jaw," and paralysis from the waist down.

AKRON — The Akron Petland store was shut down Wednesday by the chain's corporate office after an embarrassing photograph was posted on Facebook that showed employee Liz Carlisle, 20, of Ravenna, holding dead rabbits.


Carlisle's father, Joe Carlisle, described his daughter as a well-behaved, respectful young woman who has done well in school and is working to pay her way through college.
"She is a good, good person who is innocent totally as a human being of any and all wrongdoing," he said.

The official Vegan society answer to the
age old question "Is it OK to swallow" is
"If you want to"...

Above is the obscene alleged handiwork of Dr. Edward Taub, a psychologist, charged with 113 counts of animal cruelty and 6 counts of failing to provide adequate veterinary care. All charges against him dismissed. 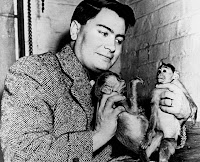 For lawful (halal) meat in Islam, the animal must be killed while the butcher faces Mecca, and either the butcher cries "Allah Akbar" or a tape plays the words over a loud speaker.

The Tasaday have been living in their caves in the rain forest for over one thousand years. Their isolation ended when a hunter from a neighboring tribe stumbled upon them while laying his traps.

Manuel Elizalde (right) embraces
one of the Tasaday (July, 1971

Coincidentally, walrus-skin blanket tossing is going to be one of
the daily activities on the cruise.

Posted by Dudley Doright at 7:09 AM No comments: