Pink Slip Mitt - A Man of the People

"There were a couple of times I wondered whether I was going to get a pink slip."

Romney's aides have told him, "Don't try and be funny."


Tone deaf to good advice, Mitt attempted to be funny on a conference call with people in next-to-vote Wisconsin.
Romney recounted what he called a "humorous" story about the time his auto executive father shut down a factory in Michigan and moved it to Wisconsin. Later, when his dad was in a parade while running for Michigan governor, the marching band kept playing the University of Wisconsin fight song.
"Every time they would start playing 'On, Wisconsin! On Wisconsin!' my dad's political people would jump up and down and try to get them to stop," Romney said with a laugh.


A joke about closing factories and putting people out of work? And in this economy? What does that say about his Marie Antoinette attitude? And he wants to represent us common folk as our president?

Mitt said he'd tell a 45-year-old with heart disease who hadn't been previously insured, "Hey, guys, we can't play the game like that. You've got to get insurance when you're well."
"I should tell my story. I am also unemployed." - Mitt speaking to a group of unemployed people in Florida. Romney's net worth is over 200,000,000.00.
"I'm not concerned with the very poor...."
"I get speaker's fees from time to time, but not very much." Romney earned $374,000.00 in one year, according to his personal financial disclosure.
"I'll tell you what, ten-thousand bucks? "$10,000.00 bet?"- Mitt trying to make a wager with Rick Santorum.


"My wife drives a couple of Cadillacs."
In 2004, when Romney was Massachusetts governor, he took a jab at the wealth of that year's monied presidential candidate, Democratic Sen. John Kerry.
"There's a senator from my state, you may have heard, that wants to get elected president," Romney said at a Republican Governors Association dinner. "And I don't know why he wants to do that because, of course, if he won he'd have to move into a smaller house."
There is at least some humor inherent in being Mitt Romney. The poor guy is not sure if his IRA is worth $20,000,000 or $100,000,000. Managing that much money must be terribly confusing for him. Just imagine his confusion with the Federal Budget.
An IRA is a tax break for the 99%. It serves zero purpose for 1% Mitt, as he is already in that tax bracket. About Mitt's income tax, according to his 550 page tax return, he pays about 15% of his income. sometimes less.
Commoners like Newt Gingrich have to pay 31%. A wopping $1,000,000.00, in Newt's case, on his comparativly smaller income. Let's see now... one million smackers is 31% of how many millions....? Wait a minute here.... a senator earns that much in retirement????
The Speaker of the House earned $212,100 during the 109th Congress (January 4, 2005-January 3, 2007).  A cost-of-living-adjustment (COLA) increase takes effect annually unless Congress votes to not accept it.

"I am severely conservative.
I like being able to fire people who provide services to me."


"PETA is not happy that my dog likes fresh air." —Mitt Romney in 2007, responding to criticism from People for the Ethical Treatment of Animals following revelations that he had once put the family dog in a carrier and strapped it to the roof of his car during a 12-hour road trip.

"I have some friends who are NASCAR team owners." —Mitt Romney, after being asked whether he follows NASCAR racing (February 2012)

"I like those fancy raincoats you bought. Really sprung for the big bucks." —Mitt Romney to a group of NASCAR fans wearing plastic ponchos at the Daytona 500 (February 2012)

Gambian Pouched Rats have repopulated an area in the Florida Keys. They are a nonnative species and one of the largest rats in the world, weighing up to nine pounds. There is concern for their impact on native species and for spreading from Grassy Key to the mainland. Additionally, they might pose some threat to human infants. Last year it was reported two infants were killed by giant rats in South Africa.
These rats can reach 30 inches long (including their tails) and are omnivorous, eating insects, vegetables, snails, crabs and human infants. How did they end up in Florida? Like many other nonnative species there, they were imported as pets but later a concern arose over spreading monkey pox, so there was a ban in 2003.


Some of the signs of monkeypox are fever, headache, muscle aches, backache, swollen lymph nodes, and exhaustion. In rural central and west Africa, some fatalities from the virus have been reported.
these rats reproduce prolifically and can have five litters a year, or up to about 20 offspring annually.

Rat meat dishes in Yangshuo, Guangxi
Rat meat is a food that, while taboo or even forbidden in some cultures, is a dietary staple in others. Taboos include fears of disease or religious prohibition, but in many places, the high number of rats has led to their incorporation into the local diets. Meat is meat is meat.

The rats scuttling around the tracks of the New York City subway pale in comparison to a gargantuan species recently discovered in East Indonesia. In fact, the recently discovered rat tipped the scales at a somewhat frightening 13 pounds. That’s sizably heftier than today’s house rat (which averages 5 ounces) and burliest wild rats (which weigh about four-and-a-half pounds).

The oldest picture of the The Pied Piper of Hamelin copied from the
glass window of the Market Church in Hamelin.

The amazing Maurice and his Educated Rodents.

One rat, popping up here and there, squeaking loudly, and taking a bath in the cream, could be a plague all by himself. After a few days of this, it was amazing how glad people were to see the kid with his magical rat pipe. And they were amazed when the rats followed him out of town.
They'd have been really amazed if they'd ever found out that the rats and the piper met up with a cat somewhere outside of town and solemnly counted out the money.
The Amazing Maurice runs the perfect Pied Piper scam.
Click to see toilet-trained rat video

If you are scared of rats, then this story might not be your favorite. Two babies have reported to have died in South Africa due to attacks from giant rats that grow up to three-foot length and have front teeth over an inch long...
http://www.mizozo.com/weird/06/2011/05/giant-rats-believed-to-have-killed-two-babies-in-s....html

0:40
Toilet Rat LOOK BEFORE YOU SIT

Professional rat-catchers behind a pile of dead rats, during the outbreak of bubonic plague in Sydney in 1900 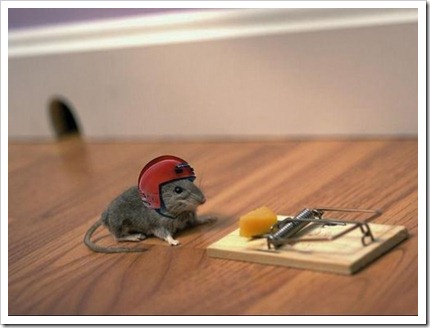 Once every 48 years, bamboo forests in parts of northeast India go into exuberant flower. Then, like clockwork, the flowering is invariably ...
Posted by Dudley Doright at 12:34 AM No comments: